Our Legacy Exhibitions Inventions of the Mind Exhibition and Workshops 2010

Inventions of the Mind Exhibition and Workshops 2010

Inventions of the Mind 2010 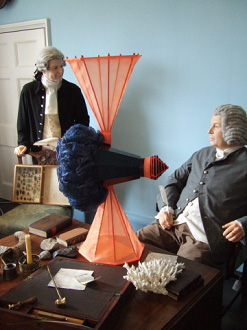 Since graduating with a first class honours degree in 2006, this prize-winning artist has exhibited throughout the UK. In 2009 she was awarded Arts Council funding to stage solo shows in London and the Midlands. Later  ‘Blink UnBlink’, her two person show with fellow Midlands based artist Olwen Holland, was part of the prestigious Liverpool Biennial.  For ‘Inventions of the Mind’ exhibition, the artist placed five of her otherworldly sculptures alongside the 18th century artefacts and furnishings of the Erasmus Darwin House museum.
Erasmus Darwin, Charles Darwin’s grandfather, is recognised as one of the most influential polymaths of his time. He was the linchpin of the Lunar Society and had wide ranging interests which included: Medicine, botany, engineering and natural history. He also had his own thoughts on evolution.
Like Darwin, Smith is a free thinker who is happy to draw inspiration from all facets of life. Her sculptures are made from surprising combinations of textiles, wood, metal and obscure fragments of vintage machinery. Each piece is completely unique, some having quite surreal qualities.
During the period of the exhibition Kirsty E Smith ran several sculpture and textile workshops with local groups. The art produced in these sessions were part of the 52 Weeks of Art community exhibition at The Erasmus Darwin House on 21st August 2010.